Just what's going on in this picture?

Less than two days lie between us and the Uncovered: Final Fantasy XV event and Square Enix has already been offering some new bits to wet our beaks with.

One item that's been really interesting is the massive new Yoshitaka Amano artwork that has been displayed outside the Shrine Auditorium where the Uncovered event will take place tomorrow evening. It offers some new insight into the story within Final Fantasy XV and we wanted to take some time to analyze this new piece of art to the best of our abilities.

As this is looks a bit like a city, I'm thinking it's safe to say that this is in fact the Kingdom of Lucis. There's a lot of buildings featured which are similar to Lucis' skylines and the Regalia, Noctis' car inherited from his father, is also seen in the artwork coming from it.

I don't believe it could be any of the other nations since, except for perhaps Niflheim, Lucis is one of the main places within the story from what we know so far.

This one I'm not 100% one, but it looks like the snout of some kind of horse coming out from Lucis. Not entirely sure if this is some unannounced Summon, however, I feel like it should be worth looking into.

This is without a doubt Noctis' car. You can see the black and being that the car is such a signature piece within the game, it would just seem silly for it not to be the Regalia. What the Regalia is riding on is another question which I go into in item 5.

The two darker figures featured here look an awful lot like Aranea and Glauca who were announced at the last Active Time Report.

Who they're carrying I think might be Luna. She has beautiful long blonde hair and appears to be wearing a gorgeous dress similar to Luna's. She also appears to be casting a spell of some sort.

I know it's a bit of a longshot considering Doomtrain has only appeared in Final Fantasy VIII, but it definitely looks like some kind of demon like creature carrying the Regalia onward. It would be really exciting if this were the case as I loved Doomtrain from VIII, but other than that I think t could be a scary looking airship design of some sort considering FFXV director Hajime Tabata's recent reveal regarding them in the game.

It's a bit of a cop out, but these both look like more monsters to me, but not ones I recognize. 6 is a small black creature who could even just be a little random monster included by Amano and 7 looks like some kind of spider which leads me to believe she's connected to Aranea some how considering Aranea's name.

8 looks like she could be Shiva considering she's drawn completely white resembling ice, but there was another water type looking woman featured in the Genesis photo which leads me to believe that it could also be her. 9 looks like another additional monster if some sort.

Looking at all of the swirls she's created, this looks an awful lot like Levianthan and I'm pretty certain it's her considering Tabata mentioning her as a vital summon within the game.

She doesn't really look like any of the characters they've announced, other than maybe Ardyn with the red hair, but something tells me this is another female character.

People have been speculating Diablos' inclusion in FFXV since the Genesis photo went live. This monster does look demon like, but considering the red throughout his design, I'm also going to say that it could be Ifrit. Ifrit's been in most of the games and I tink if Shiva's in the game, surely Ifrit must be as well.

This one doesn't appear to be too close in the action. I just don't think he's very integral, but scary looking nonetheless.

This horse and rider combination is giving me all if the Odin vibes. You can see him holding a sword or joust of some sort as well. As Gilgamesh had been canned, I really hope perhaps we'll get Odin in on the action.

Considering how big this guy is to the rest of the characters featured I'm thinking this might be Titan. The only thing that throws me off a bit is the tongue which I don't remember Titan having.

There are two women featured which look a bit like Shiva. This is the other. She has white hair, ice like skin, and so on. I don't know who else she could be really.

That's it for our analysis. Let us know what you think in the comments or if there are any we might've over looked. Check back for more Uncovered information.We're almost there! 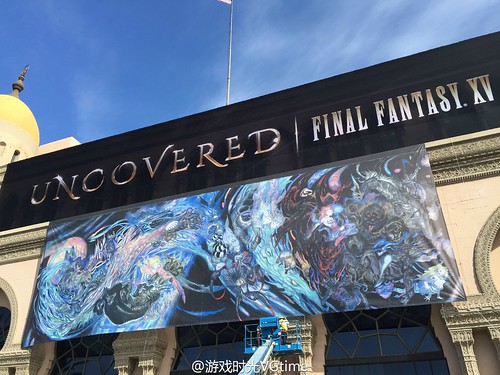