As director Hajime Tabata said it would be, Gamescom 2015 was a big show for Final Fantasy XV and in his latest interview with Famitsu Magazine, Tabata (and some of the wider team) reveals even more information regarding Final Fantasy XV's development.

Here is a nice little breakdown of the interview, categorised into different categories for your viewing pleasure!

Chocobos
According to Tabata, the Chocobos in Final Fantasy XV are extremely fast to help players travel through the huge areas of the game. Although they can't fly, they'll be able to jump really high and there may be areas of the game where you need to use a Chocobo instead of a car.

Altissia is the Most Important Place in the Game
Altissia which has been featured in concept art previously, apparently acts as one of the "most important places in the game" by Tabata. It's also based on the city of Venice in Italy which you can probably tell by the gorgeous canals that seem to be streaming through the city. (Pictured below)

Gas Station Home To Cindy and Another Character
Although they can't reveal him just yet, there's apparently another character who owns the gas station that Cindy works at and he's apparently a character that's familiar to the Final Fantasy series *wink wink*. (Pictured below)

Lestallum
Going along with Altissia, Lestallum is also based on an actual place. This one is actually based on Cuba. Apparently the town is home to a huge crater where a meteor struck ages ago, but still remains burning. Lestallum is apparently run on the energy from this meteor. (Pictured below)

Leviathan is "Very Close to God"
The summon Leviathan has been revealed to be a woman and she's apparently very intelligent and oozes elegance. She, like the other summons, will play a very important role in the game.

Luna and Noctis Won't Be Your Usual Love Story
There is, of course, a bond between the two characters. They were supposed to be married to each other, but regardless, their story will not be some generic love story.

Childhood Stories Will Be Used To Deepen the Story
According to Tabata, he will be using the characters' childhood to make the story deeper and help players feel more for the characters in the game. They'll be played throughout the game.

Tabata also said he might be including classic Final Fantasy music as radio tracks in the car, but nothing has been confirmed on this front just yet. Only time will tell. At least we have PAX Prime coming up quite soon (August 28-31, 2015) and apparently Final Fantasy XV will be in attendance so keep a look out!

You can check out some of the images from Gamescom below: 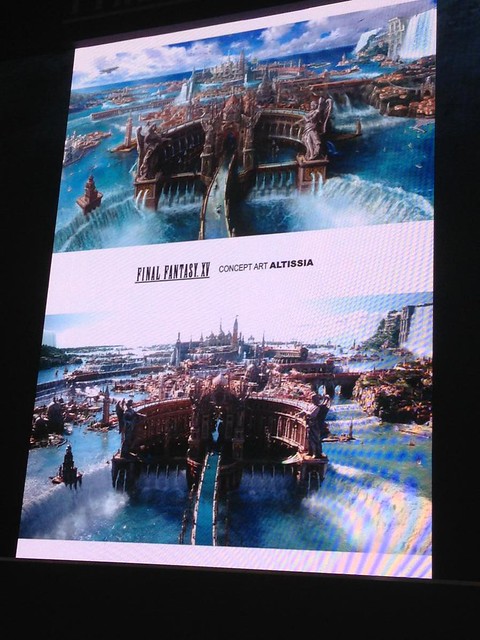