Review: [All the] Brave[st] Exvius

You could say that we’re in something like a Golden Age for Square-Enix’s flagship franchise: Type-0 HD impressed last year; Final Fantasy XIV is still going strong; Final Fantasy XV and World of Final Fantasy drop this fall; and we have remakes/remasters of Final Fantasy VII and XII on the distant horizon. Even with so many other interesting titles by other developers coming out, it seems I have Final Fantasy games calling me at every turn.

At the vanguard of Square-Enix’s campaign is its mobile platform. After a rocky start with the horrendous All The Bravest and a slew of graphically-massacred ports a couple years ago, things turned around last year with Record Keeper and Portal, a news app that caught our attention by including Triple Triad from Final Fantasy VIII. Two other games remained in the company’s pockets awaiting for release outside Japan, Mobius and Brave Exvius - until this week.

Developed by Japanese studio Gumi Inc. and published by Square, Final Fantasy Brave Exvius rolled out for iOS and Android devices this week. You may know Gumi from their popular game Brave Frontier, a long-standing fixture on Apple’s top grossing apps list that earns an estimated eighteen-thousand dollars daily. Their new, original installment in the Final Fantasy franchise touts “exciting battles, awe-inspiring visuals, and a whole realm to explore,” “all the wonders of a grand RPG in the palm of your hand!”

Being a Record Keeper addict and a veteran of Brave Frontier, I downloaded Brave Exvius to see if it could make good on its promises and the name it bears. 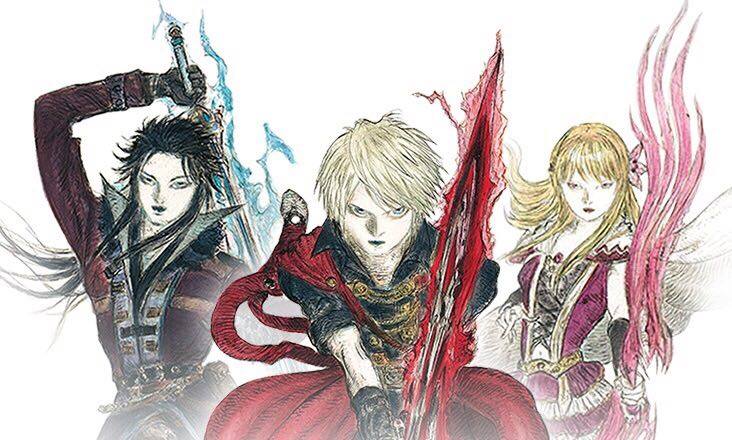 Brave Exvius even got some art from Amano himself - where’s the same treatment for Tyro and Doctor Mog?

A quick CGI cutscene, looking like something yanked out of the PlayStation anthologies, introduces our heroes Rain & Lasswell before putting you in their 32-bit-style boots. Once I played a couple battles I was totally unconvinced that I wasn’t simply playing a BF sequel, as everything from the UI to the gameplay was taken right out of the original game. I wouldn't have been able to tell the protagonists apart from other BF characters.

The first notions of plot, however, establish the Final Fantasy influence with crystals. BE appeals to the longtime fan’s nostalgia by putting a new spin on the familiar plot archetype used in four 2D installments - your main motivation at first is chasing a mysterious man who is intent on destroying the crystals that balance the world. Everything was very familiar but not particularly riveting or shocking; when I returned to my airship to find it destroyed and its crew slaughtered by the same mysterious man who had just cast me aside, I wasn’t affected or surprised.

By the end of the first chapter, when I could first explore the menus, I saw little more than a BF sequel with a recycled FF plot, but I was willing to give it the benefit of the doubt. Thanks to the preorder campaign bonus and the purchase of a cheap beginner’s pack, I had twelve tickets for the premium character raffle which I hungrily redeemed. Of the dozen, I redeemed one 5* character (Gilbert, a ripoff of Edward from FFIV), one 4* (Shadow from FFVI), and another 4-5 familiar characters at 3*, with the remainder being original characters ranked 3*. With a wealth of draws on the lesser raffle I got a horde of 1-2* generic characters. 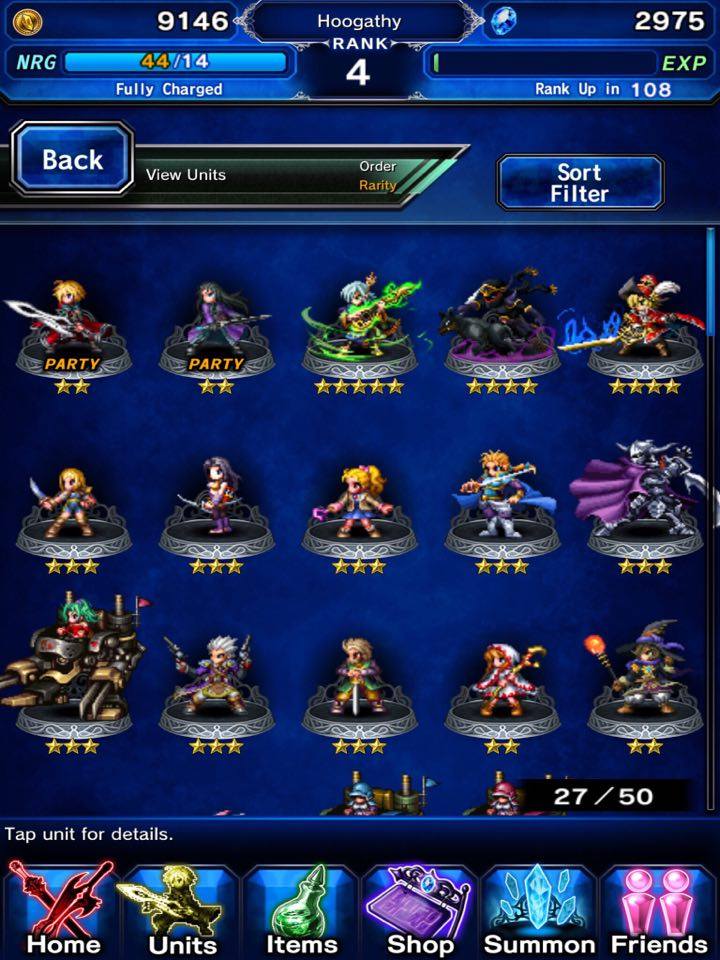 After a dozen premium gacha draws and a slew of lesser raffles, this was the roster I earned. Note how about half of my top fifteen units in this tribute game are original - now look at Record Keeper, where the only original character is the avatar unit. (Screenshots from iPad version.)

With a bolstered roster I continued further into the story, which has our heroes rushing back to their homeland on foot with a detour to defeat the Esper Siren and plenty of banter breaks. By this point I was pushing myself to keep going, motivated by little more than burning through my entire stamina pool before putting the game down.

When I was reminded, once again, upon my seventh daily login that premium currency packages are available, I decided to pack it in. I wasn’t prepared to spend over a hundred Canadian dollars for a single set of matching items for a single character, no matter how many times the sparkling treasure icon tried to lure me in.

Something is Rotten in the State of Grandshelt

To fill in the growing gaps between proper main series games Square has been relying on homage games like Theatryhthm, Dissidia, and Record Keeper, separate entities that feed on nostalgia; while we’ve been waiting six years for the next offline FF, these spinoffs have kept us entertained because they’re good games that happen to appeal to our memories. Brave Exvius tries to keep this tradition going with a familiar cast and a story premise that would have fit right into the SNES era.

Unfortunately, that’s about the highest praise I can give this game: it tries to present another compelling homage to the Final Fantasy franchise. 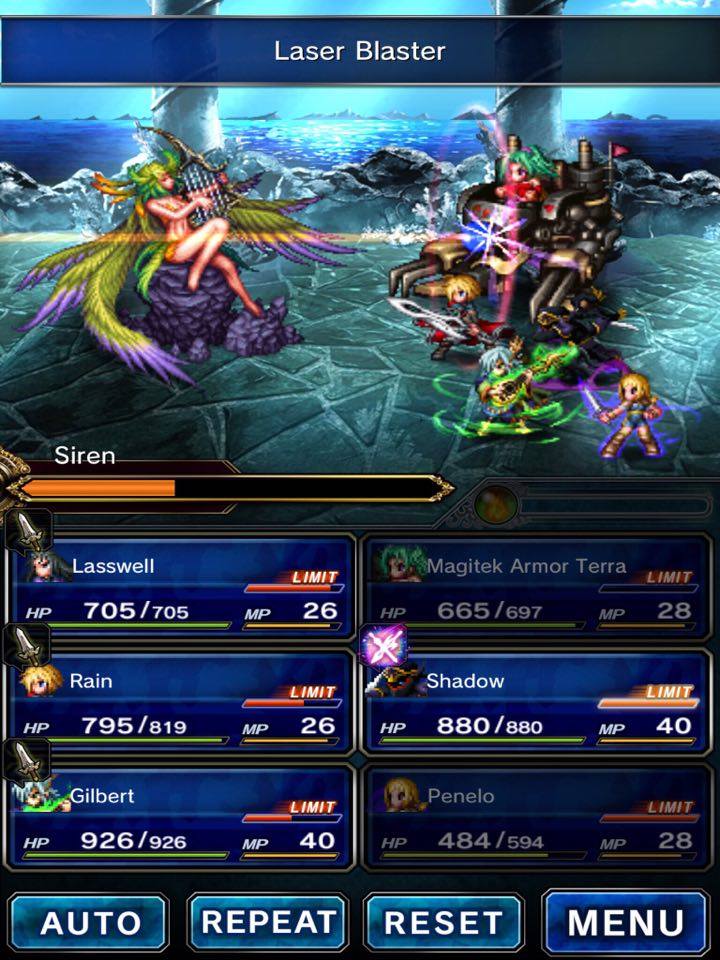 Some of the sprites are really awesome, but seeing familiar faces in this proportion with animated breathing never stopped being a little strange to me. It’s still better than the mobile ports of FFV & VI, but that’s not exactly glowing praise.

As a game, I couldn’t invest in Brave Exvius. I played Brave Frontier idly on the bus for a month or so back before Record Keeper launched and haven’t thought of it since. Returning to this style of gameplay now, I wonder what kept me motivated back then - because even with my favourite characters instead of Brave Frontier’s generic anime-style characters, and a slew of new features, this game is not convincing me. Every unit has abilities and limits, expandable with experience and heavy use, that you use by swiping their panel on the button on the screen, and Espers function similarly, but beyond this strategic skill selection the gameplay mechanics boil down to “touch this series of buttons in the vaguest form of a pattern to maximize the damage you deal.”

To break up the monotony of its actual battles Exvius introduces a sort of dungeon crawling mode. After clearing a location you can return and explore the actual environment, fighting random battles and collecting treasure. At first this was an interesting twist. I even discovered a FFIV-style hidden passage - in an incredibly obvious place. When the novelty wore off the lazy game design shone through once more. 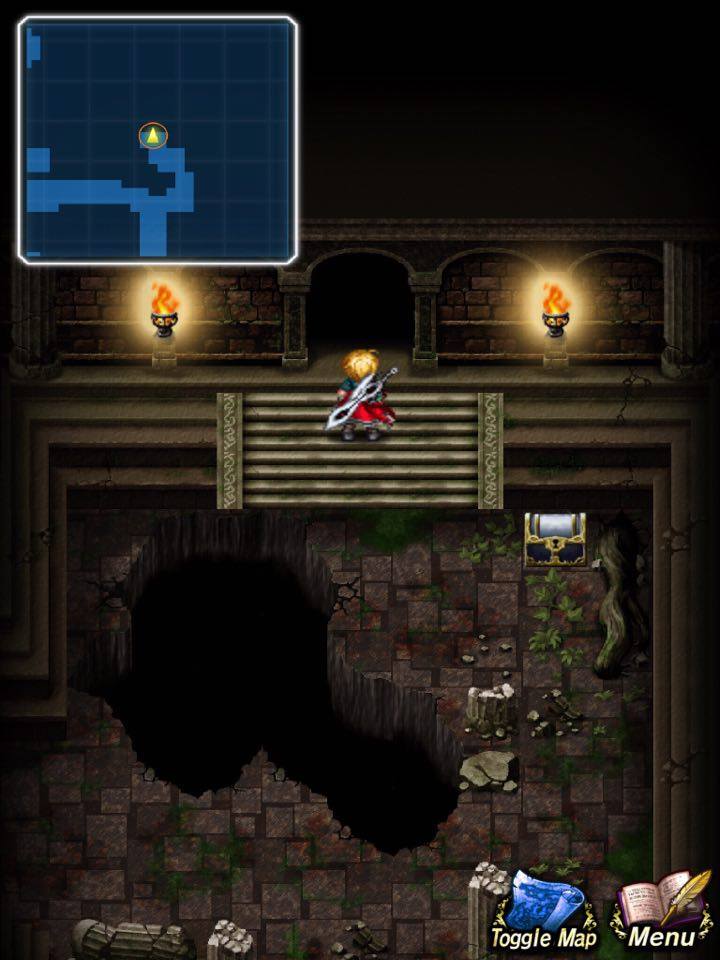 The exploration mode is neat at first but wears thin. Not even obvious but unmarked secret paths, like the one beyond this door, can help spice them up.

Speaking of unit development, Brave Exvius skews heavily to Gumi’s past in a bad way. Let’s say you’re lucky enough, like me, to draw a 4* Shadow from the draw. You can level him up with experience and such, but eventually you’re going to have to draw that individual unit from the extremely random draw again and combine your two copies to truly advance him in a meaningful way. This type of mechanic is referred to as gacha, in reference to a type of capsule toys called gachapon in Japan, and it’s the same gambling strategy that has led so many mobile games to million-dollar monthly profits.

Almost every social game for phones has some form of gacha system, even my beloved Record Keeper; it’s how they use this randomized distribution that demonstrates how exploitative a game can be. For instance, the horrible gacha odds are what drove me away from BF in the end, when I couldn’t optimize my favourite units reliably. Looking back at its model through the lens of Exvius, I realize just how manipulative it was - and how pointless it was to chase prizes in such a shallow game.

Furthermore, while the game boasts a pretty impressive roster already (including some people we probably won’t see in other tribute games) there are some issues that really irked me. There’s a high volume of original characters intermingled with the familiar FF guests, making the gacha pool even cloudier. If you were hoping to field a team of your favourite characters, it may take an incredibly long time to obtain them all and max out their levels - and the only thing more frustrating than chasing your favourite hero is to get some random, generic unit instead. Nor did I agree with the process of assigning ranks to units. Getting generic Gilbert at five stars but people like Edgar at three just didn’t sit well with me. It’s bad enough having so many non-FF characters in a FF-tribute game without them stealing the spotlight from the characters who deserve to be there. 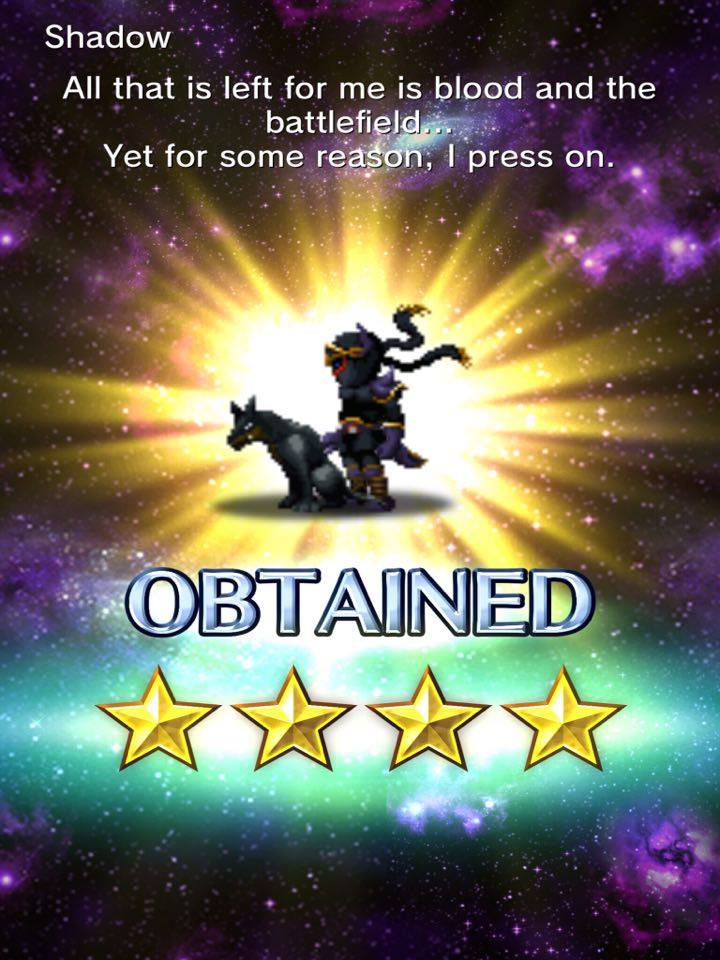 I also wondered for what reason I pressed on. I do give Gumi credit for including Interceptor with Shadow, however.

The Final Verdict: Be Brave & Keeper On

Ultimately your enjoyment of Brave Exvius will hinge upon three factors: whether you’ve played Gumi’s prior work, your tolerance for gacha, and your willingness to suffer through tedious tap-heavy gameplay. Have you already moved on from Brave Frontier? Not willing to pay (ridiculous) amounts of money for the (ridiculous) chance of drawing the character you want repeatedly, or spend triple the time grinding for the same reward? Do you find the idea of tapping the same six buttons in a pattern repeatedly until a dungeon is complete an uninteresting gameplay concept? Then there is nothing here that’s new and worth spending the time or phone space here save Final Fantasy nostalgia, which can be found in much better forms elsewhere.

Had I not played Brave Frontier and if Record Keeper was not yet available, my tune would probably change. Most of my gripes are born in the shadow of these prior experiences. Then again, the flaws would probably show through quickly as they once did for Brave Frontier. If the gacha compulsion doesn’t get its hooks in, I can’t imagine this game holding anyone’s attention for longer than a month.

If anything, Brave Exvius gave me new appreciation for Record Keeper. Gacha success does make the game richer and easier to a point, but the nostalgia has depth and meaning, it plays like a proper Final Fantasy, and the characters aren’t placed on arbitrary ranking pedestals alongside forgettable RPG stock characters. If you’re looking for a Final Fantasy fix on your phone, literally anything else on the iOS and Android platforms will provide a better experience. Only All the Bravest, the ultimate gacha exploitation tool, is less endearing.

A Canadian writer and geekdom enthusiast, Chris has never found a Final Fantasy he couldn't appreciate. If he were to choose a Job class to represent him, he'd like to say Paladin, though Scholar is more likely. Find him on Twitter.