Welcome to a special installment of Final Fantasy Unionâ€™s Record Keeper Update! Another festival event is almost upon us, bringing a wealth of relics to be won and unique challenges to face! Letâ€™s take a look at the goodies DeNa has in store for us.

Every week we get a couple fresh banners connected to the current Event Dungeons, featuring a new crop of signature 5* items and new temptations on which to spend your precious mythril. The sheer volume of content in Record Keeper is becoming staggering; if it was all obtainable at once, we would likely drown in it. Instead we have to try to pull the best possible items available in their own time - and thatâ€™s what makes festival events so critical. DeNa brings back some of the best items once available and puts them into five amazing banners, each only available for forty-eight hours.

The stakes are high, especially if your mythril supply is low. Choosing between one of these five lists, if any, can be quite strenuous. This article was written to help steer you in the right direction strategically, but ultimately the decision is up to you based on what you already have. Many of the recommendations that follow assume that you do not already have these items and may be skewed by my own personal perspective - what I own, what Iâ€™ve used as Roaming Warriors, and what Iâ€™ve seen from dabbling in the Japanese version.

One of the beautiful things about Record Keeper is that you can build parties with pure strategy in mind, or with your favourite characters regardless of their strategic synergy, and still do pretty darn well. If thereâ€™s an awesome relic listed for one of your favourite characters, it might be worth pulling for it just for the synergy with your personal tastes. Just keep the odds of pulling any particular item in mind (about 1%).

I recommend looking at the possibilities earnestly. Make a list of the things you want off each banner, see which ones you already own and donâ€™t want to pull again, look at what realms you lack synergy items for, and keep in mind which characters you would and not use. Remember as well, some soul breaks may be useful or reliable if you can use them from a Roaming Warrior, not your own characters. With that in mind, hereâ€™s the list of banners for this festival: 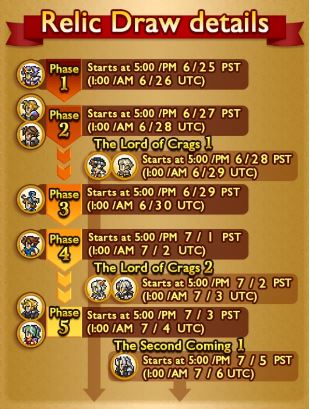 Verdict: Thereâ€™s several good healing, buffing, and debuffing moves here, but the real star is Paladin Cecilâ€™s new Burst Soul Break, Paladin Force. It grants EnHoly, increasing the holy damage he deals, and both burst commands happen to be holy-elemental. Considering the sheer number of bosses vulnerable to holy, and the general reliability of knights like him, this is a very desirable addition to your arsenal. If you pull seeking it, you can at least get some good utility techniques if you miss it.

Verdict: Two BSBs make this banner tempting, but their elemental prospects can be a little niche. Some other useful heals and buffs, but overall this banner is a little underwhelming compared to the others (Sorry Squall). Pull here only if you want something for personal reasons.

Verdict: Despite what I personally deem two lesser items (Shadow and Redâ€™s), this banner deserves your attention. Tyroâ€™s BSB makes him even more vital: he begins by casting Protect & Shell on your party (which, by the way, stack with his Sentinelâ€™s Grimoire buffs), then wears down opponentsâ€™ offenses and defenses. Thereâ€™s also some fantastic â€œmedicaâ€ techniques and three basic Soul Breaks that are still very relevant.

Verdict: Bartzâ€™ BSB is similar to Squallâ€™s in that it packs a series of elemental punches, but here you have more common weaknesses to exploit; remember that these will target whichever element is weaker, but unlike Squallâ€™s BSB they donâ€™t default to non-elemental. The biggest draw here is the infamous Shout, which is perhaps the most coveted SSB in the game for the incredible boost it gives to a physical team. For this alone the banner might be worth your attention; a relic for Gilgamesh is a decent consolation prize, as heâ€™s still rated a highly valuable character. (I struggle with Vaanâ€™s inclusion though; heâ€™s a valuable asset in Record Keeper, but I dislike him so much that I donâ€™t want to use him in this game if I can avoid it.)

Verdict: Fenrir Overdrive was our first BSB and itâ€™s still useful for its sheer force; Terraâ€™s new BSB brings another suite of elemental attacks with a magical twist. The true star here, however, is one of the meagre Soul Breaks: Tyroâ€™s outstanding Sentinelâ€™s Grimoire. If you donâ€™t already have it (or Ysoldaâ€™s identical Stoneskin II), I believe this banner deserves at least 50 mythril from you. Every player can benefit greatly from having this in their roster. On top of this game-changing prize, several items from the coveted and controversial Tactics banner recur here which enable Ramza and Agrias to truly fulfil their respective potentials, and Leon has a viable contender for Shoutâ€™s throne - if it had haste, I might call it superior.

Personally, I would rank the banners in ascending order thusly: 2, 1, 3, 4, 5. But this is my personal opinion, and the way Iâ€™ll be prioritizing my own mythril use (Iâ€™ve got 6 full 11x pulls to designate after all!). If your team is missing buffs or heals, target the banners that feature those techniques on characters youâ€™d prefer. (But really, you should try to get Sentinelâ€™s Grimoire if you donâ€™t already have it! Tyro is a character with nearly infinite potential, and combining this soul break with a record materia like Dr. Mogâ€™s Teachings can redefine your approach to Ultimate/Ultimate+ bosses.)

Alongside the festival, Global FFRK is finally getting a special Final Fantasy V-themed event featuring some of the seriesâ€™ most iconic bosses. Each battle has two different phases (the easier â€œBig Bridgeâ€ and Ultimate-level â€œVoidâ€) with unique medal conditions and rewards. Test your mettle and show off your shiny new soul breaks against these challenging foes!

Coming Up: â€œThe Lord of Cragsâ€

June 28 will mark the return of FFXIV to the main Event Dungeon stage, and the arrival of two more Scions of the Seventh Dawn, Yda and Papalymo. For the next few months weâ€™re getting characters and new skills a little less frequently, so enjoy the rush of new additions now while we can! Yda can use Combat 5 / Support 4 / Monk 5 abilities (and, like Jecht, is a monk-type that can equip swords for much more versatility); Papalymo, meanwhile, is another decent mage with access to Black 5 and White 4. Memory Crystals and Memory Crystal IIs are available as rewards for all four XIV representatives, and the banners here are chock full of awesome items for them - including Thyrus, which imparts Ysoldaâ€™s Stoneskin II!

Thatâ€™s it for this special update. Good luck in the festival and on the Big Bridge! Let us know in the comments how you make out!

Special thanks to the folks at r/FFRecordKeeper and Kongbakpao for sniffing out this information ahead of time!

A Canadian writer and geekdom enthusiast, Chris has never found a Final Fantasy he couldn't appreciate. If he were to choose a Job class to represent him, he'd like to say Paladin, though Scholar is more likely. Find him on Twitter.