Lightning In Vogue: What This Means For Gaming

We may all have different opinions over Lightning's recent stint with Louis Vuitton, but there's one thing we can't ignore; video gaming has just gone Vogue and in a big way. If you're not familiar with what Vogue represents, it's essentially the highest level of couture. To be featured in a Vogue magazine, especially on the cover, is a great honour in the fashion world. Granted, Lightning has not reached that level yet, but the fact that she's been used in a Louis Vuitton advert within the latest Vogue magazine, among all of the other ads which would feature some of the most influential fashion brands in the world, it's a huge step for video games and how it's influence is affecting the world. You see, Vogue are very particular about their associations, so not only has did this campaign have to pass Louis Vuittonâ€™s brand for approval, it also had to pass Vogueâ€™s.

Many people might wonder why Lightning is the one they chose if they wanted to go for an edgy campaign featuring video games, especially considering Lightning's personality and her lack of general exposure right now. Lara Croft, for example, has gone through something of a renaissance and is front and centre due to Rise of the Tomb Raider. However, perhaps it makes more sense when you consider Lightning's global popularity, what she represents to Final Fantasy (a behemoth of a video game franchise), and what she represents for women in the video games industry. All things considered, there is no female character better to represent the series and video games in general.

Acting as a strong, independent, and driven protagonist, her confidence and "no crap" attitude, while also having a significant amount of grace, allow her to stand tall among the other girls of video games. Sure, there are many Final Fantasy female characters who could fit that mould, but with Lightning, Square Enix managed to craft a character that stands out from the crowd. This is the case within her own game, where the rest of the cast could also stake a claim to being rivals for the spotlight, but also within the franchise as a whole. At this point, her only rivals come from the wildly popular Final Fantasy VII, where you instantly think of Cloud and Sephiroth. 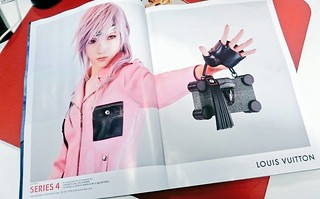 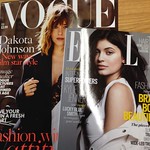 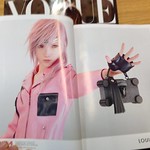 Perhaps due to this association, the first of its kind on this scale, readers of Vogue may have their interest piqued to find out more about the campaign. Itâ€™s already leading to lots of positive discussion about the brand and its decision to associate itself with a video game character, but let us not forget they arenâ€™t the first luxury brand to do so. Indeed, Lightning herself (alongside other cast members) featured in a range of clothing for Prada, but the exposure paled in comparison to this. Lightning isnâ€™t just in Vogue, sheâ€™s the poster girl for the entire campaign, just as Naomi Campbell or Emma Stone might be. Sheâ€™s appearing in all brand collateral related to in online and in stores.

The fact this is happening in the Western world, and not just in the Asian market brings a strong association. If characters such as Lightning are able to represent something as particular as a couture brand, maybe it will allow people to see gamers not as the hibernating geeky stereotype, but instead as actual people. It will, and has already started, to force discussions regarding computerized models and may even have parents asking their children about who this mysterious pink haired lady is and what her story is about. Why is she so special that she was chosen to be the face of Louis Vuitton?

So many times, I've heard stories of parents disallowing their children to play video games with reasons like "they'll become lazy" or "video games don't teach good morals". With Lightning as the new central model of Louis Vuitton, hopefully it might allow parents to open their minds a bit to our world offering them a new way to connect with their children.

Video games have a bit of a spotlight on them now within a completely new demographic. Let's just hope we can keep it from staggering and allow this momentous occasion to carry us further.