Welcome all to another edition of Casual Final Fantasy Cosplay! This week's casplay is very near and dear to me as Gippal is one of my favorite characters of the Final Fantasy series.

Firstly though, allow me to apologize for the massive delay. I've been trying to find a way to show you all what these casual cosplays could potentially look like were they put together. At first I tried my Wacom, but unfortunately for some reason, my Wacom keeps bugging out making it very difficult to produce artwork. So instead I'm going with old faithful and scanning in my drawings then adding colour later. I'm a bit rusty, but hopefully with time and practice my drawings will improve! So without further ado, here's my Gippal design: 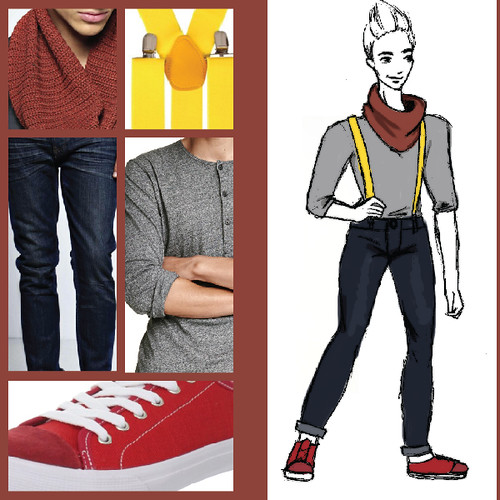 If you haven't played through Final Fantasy X-2 yet, it's okay. I know it's not everyone's cup of tea, but I will say the gameplay is incredible and there are a few fantastic character additions that I think deserve more recognition. One of which is Gippal who's a smooth talking Al Bhed. He just has such a cool air about him. Very reminiscent of Irvine from Final Fantasy VIII but with more confidence. I really love his design even though it's really quite random when you pull out each bit individually, so I've toned it down significantly offering you all a bit of leeway in what you feel comfortable wearing for a Gippal casual cosplay!


Henley Shirt - $9.99
Okay, I know it's another Henley. I just love these shirts. Probably part of the reason I'm so obsessed with Dexter. Seriously though. These shirts are amazing and generally go with everything. I chose grey as it was the closest I could find to the lilac colour that Gippal wears. Grey also goes with a lot of different trouser colours so really for $9.99, it's worth it.
UK Alternative - Henley Shirt - £7.99

WASHED INDIGO SLIM FIT JEAN - $35.00
I love dark trousers. They really are useful to have and these ones really look stellar. Gippal wears weird chaps style trousers which, unless you're going to a rodeo of some sort or you're actually a cowboy, you probably wouldn't wear on a regular basis. So in order to capture Gippal's style, I went with slightly baggier jeans which can be rolled up at the bottom giving the pant leg the appearance of looking even larger. Gippal's trousers are quite dark, so I thought a navy blue would look good here.
UK Alternative - WASHED INDIGO SLIM FIT JEAN - £20.00

KNITTED SNOOD - Rust - $14.00
Another adaption. Gippal wears a red bolero-esque jacket so in place of this, I thought a snood would work well. It'll give you a nice balance between the baggy trousers and tight fit of the Henley, plus you can never have too many snoods especially with winter coming up.
UK Alternative - KNITTED SNOOD - Rust - £8.00

Solid Yellow Suspenders - $7.99
Okay so this one is a bit of a stretch. Gippal's got a bit of the Terra crossed suspender action going on but instead of them being red, they're highlighter yellow. Nomura, WHY?! So in an effort to be authentic, I'd say go for the yellow suspender look. It's actually come back in a bit of a weird way. Men are generally wearing suspenders now. Perhaps not bright yellow ones, but suspenders in general.
UK Alternative - Braces Suspenders - Yellow - £2.49

Generic Surplus Men's M Wellington Sneaker - $18.75
Finally we have these sneakers. Gippal wears boots, but unless you're willing to shoe out loads of money for boots that might not even match Gippal's, I'd say go with these. They're comfortable, simple, and cheap! Plus they look a lot like Converse and they're a quarter of the price! Win!
UK Alternative - Canvas Trainers Low Top Baseball Pumps - £8.00

And that's it! So as I said, I kept it quite simple. Should you want, you could add some gloves as well should you want to.

If you have any requests for future casual cosplays, please don't hesitate to leave a message! I'm always happy to take on whatever characters you might have in mind.

The Creation of FFXIV: Shadowbringers continues with Episode Five: Spawning the Sounds