Welcome everyone to another edition of Casual Final Fantasy Cosplay where I scour the internet for affordable everyday clothing items that you can use to recreate your favorite Final Fantasy characters' costumes without breaking the bank.

Last week was a bit of a special one as I kind of had to put my money where my mouth is and show you guys a Casual Final Fantasy Cosplay I actually completed and wore to the which occurred last weekend. This week we're back to normal with one of my all time favorite Final Fantasy characters, Laguna Loire. 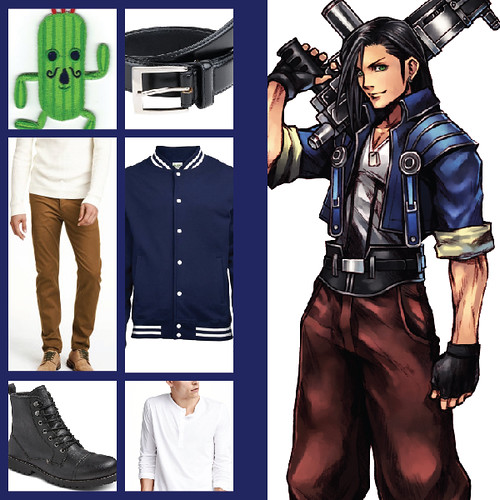 Even though he's not really the "main" character of Final Fantasy VIII, sometihng about Laguna is just so damn memorable. Whether it's his general silliness or AMAZING limit break, there's just something about this guy. I've actually been tempted to do a female Casual Cosplay version of Laguna's outfit and might still do in the future, but for now, here's a traditional Casual Cosplay of Laguna Loire.

Henley Shirt - $9.99
When starting out, I thought perhaps a v-neck t-shirt would suffice, however I've noticed that Laguna is actually wearing what appears to be a long sleeved v-neck as you see the sleeves rolled up on the sides. To accomodate for this, I decided to go with a Henley. I love Henleys so much. Perhaps it's my small addiction to Dexter, but alas, I'm giving Laguna a Henley because reasons.
UK Alternative - Henley Shirt - £7.99

Awdis Mens College Jacket - $23.95
As tempted as I was to perhaps go the blue blazer route, blazers are pretty expensive, but after doing some digging I found that these varsity jackets are actually quite cheap and lately they've become quite popular to wear as a staple item. I had a varsity jacket through high school and they're absolutely amazing. I also thought that the strips in the jacket match the lining on Laguna's jacket quite nicely. You just have to make sure the jacket is blue and you should be alright!
uK Alternative - Premium Plain College Jacket - £14.29

Twill trousers Slim fit - Camel - $29.99
Laguna's trousers are quite unique in that they're like a reddish brownish camel. Unfortunately, that mixture is quite difficult to find within our price range, so after some digging I thought these Twill trousers worked just fine. They don't have the puffiness of Laguna's, but as the varsity jacket is quite puffy, I don't want to unbalance the sihouette too much. Stick to one puffy item per ensemble, otherwise you'll end up looking really untidy.
Twill Trousers - Camel - £14.99

Men's Espen Boots - Black - $39.99
Curse you Nomura and your boots! In an effort to save some money, I've decided to go with these which are $40. Laguna of course wears massive ones, but as you're not going to be putting them over your pant legs, you don't really need to get super high ones for this.
UK Alternative - Sneakers - £29.98

Sportoli Mens Classic Stitched Genuine Leather Belt - $9.99
Black belts are so essential for your wardrobe. They go with everything and offer a great deal of class to your ensemble. Plus they keep your trousers up! Laguna wears what looks like one of those weight lifting belts and unless you're planning on lifting weights at the con, I definitely suggest going with old faithful.
UK Alternative - MENS REAL LEATHER 1.25" BLACK BELT - £7.99

A bit of an expensive one this week, but really if you have some of the items listed already it can cost you a lot less. Most men already have a pair of black shoes/black belt so really getting the jacket would be the biggest expense. but as I have to include everything, it gets a bit more pricey.

Aside from that though, you can use all of these items in your everyday wardrobe so at least you can rest assured that your money wasn't a waste!

That's all for this week's post! Let me know if you have any you'd like me to cover in future posts! Next week will be another female character so stay tuned!