There really isn't a lot you can cosplay when you're pregnant from the pool of Final Fantasy characters. There are a lot of characters who wear short skirts and belly bearing clothes which I'm honestly not really too fussed about wearing in my current state. I admire my bump, but at the same time I'd rather stay covered up!

I got to looking at possible options and for some reason Moogle always came to mind. They're so cute and puffy and I really though that I could do something with that while being puffy myself. 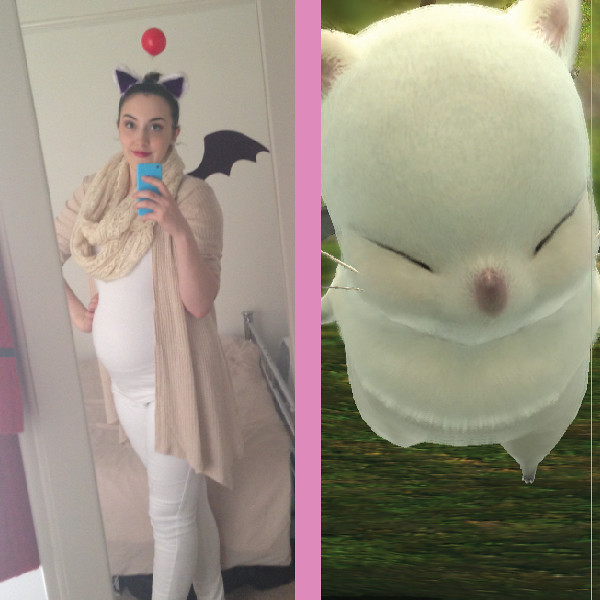 It was particularly hard to decipher how I wanted to go with this one. At first I was thinking a white dress but as we're heading out of the Summer season, finding a suitable white dress in my size in my price range really was difficult so instead I decided to go with a shirt and trouser combo and I'm sure glad I did!

This post is going to be a UK only post as I bought most of my clothing from UK vendors, but they should be easy to find around the web. Also as I did this one using my own stuff, I'm going to list what I spent extra to make the cosplay to show that you can make cosplay from things you have lying around.

Jersey top - White - £3.99
First of all, for all you pregnant gals out there, these vests/tank tops are AMAZING. I bought a bunch of them around April when I was in my first month of pregnancy, in a size up and they've been wonderful. They come down pretty far so they hide the bottom of my tummy quite well and for this casual cosplay, I just wanted to wear something comfortable and simple and this definitely was the most comfortable top I could've chosen.

MATERNITY MOTO Definitives White Joni Jeans (Top Shop) - £15.00
You'll notice I don't have a link for these. They were actually on offer and I think they completely sold out of them now. They're white jeggings which I was so happy to find for so cheap and in maternity. The stretch in them was really nice. They're actually my first pair of maternity trousers. I think I'm still too small for them as they slid down a bunch, but they were so comfy otherwise. Also they worked well with the ensemble I was putting together.

Tube scarf - Already Owned
H & M don't seem to sell the snood that I'm wearing for this cosplay anymore. Granted I bought it months ago. Either way, I had this lying around and thought it represented the cute fuzzy collar that some Moogles have really well. It also offers a bit of a statement up top and being that it's ivory instead of white, it offers a bit of warmth to the ensemble as well.

Cream fine knit waterfall cardigan (New Look) - £14.99
Again, I found the cardigan I wore on sale, so unfortunately it is long gone, but I absolutely love the one I found. I actually had to stop myself from wearing it the entire week up to the con because I just love how comfy and cuddly it was. Plus it really completes the look and gives it a sort of effortless chic. I definitely suggest something similar for a cosplay. 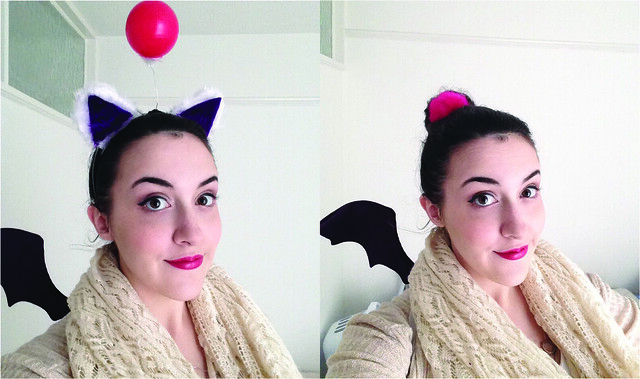 Pink Pom - £2.99
As an alternative to the Moogle ears I wore (which were from Mooglears and Stuff!), I bought this hair band with a pink pom to represent the adorable little ball that Moogles have on their heads. I kept trying to rack my brain how I was going to make it simple but casual enough for this ensemble so when I found this hair tie, I was so happy. Also it was really cheap so thankfully I didn't have to break the bank.

Pink Converse - Already Owned
I bought these months ago when my old Converse kicked the bucket. I remember they were on offer, I suppose, primarily because they were pink. I just loved them so much and thought, heck, for ~£15 than their normal price, I wasn't going to let them slide. I thought that these would be so cute for the ensemble, plus comfortable and being that I was on my feet most of the day and travelling to and from train/tube stations, I needed something comfy to slip my feet into.

Moogle inspired wings by Silverfaction - £16.64
These are just so amazing. I can't say enough about these wings. They're extremely durable and long lasting and awesome. I got so many compliments on these wings and I definitely suggest them. Granted they make the outfit a bit less casual, but I only had them on while at the event so walking around London, I just carted them around with me. SilverFaction have a ton of other wings like these in their store and I definitely think they're worth the investment!

I'd say this was a successful afforable adorable casual cosplay for me. I was so happy that I could pull it together in time. I definitely think if there are any other pregnant gals out there looking for some cosplay ideas, always note that comfort is KEY! Pregnancy is uncomfortable enough!

Hope you enjoyed my Casual Final Fantasy Cosplay for this week! Next week I'll resume my normal programming and hopefully have another male character to present. See you next time!