Although we're all waiting for the Active Time Report at this year's Pax Prime, I thought it be prudent to pass the time with another Casual Final Fantasy Cosplay!

Last week's was another Final Fantasy VIII hero, Rinoa, whose outfit I adapted into a sweet little skirt/blouse ensemble and this week I have one that was specially requested and it's actually the first caharacter I've done from a Final Fantasy spin off title! 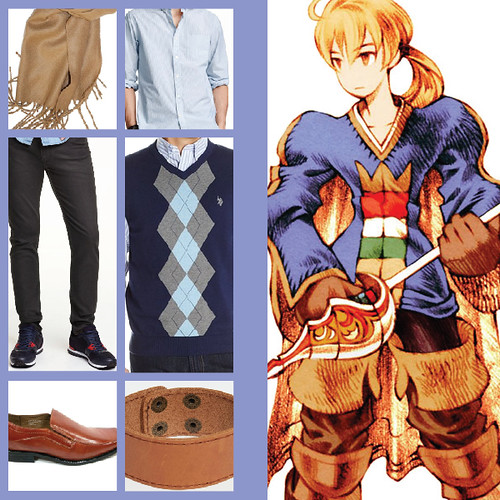 Ramza's design, although it appears to be really simple, is actually pretty specific. He has a lot of little details. It's one of the things that's refreshing about his designer Akihiko Yoshida. You can see it in both the characters of Final Fantasy Tactics as well as in the designs from Final Fantasy XII. Because of this, it was particularly hard to make this cosplay recognizable as well as aesthetically pleasing.

U.S. Polo Assn. Men's Argyle Sweater Vest - Navy - $21.40
At first I thought perhaps I could find a hockey jersey that best matched Ramza's tunic. They're big, bulky and have the type of lined v-neck that I need. Unfortunately as fate would have it, I was not able to find any that were Ramza's colors and the custom ones are very expensive so I had to find an alternative. With that in mind, I thought why not a v-neck sweater and then I fell upon sweater vests. I really love the way sweater vests look. They give that classic know-it-all look which I think is just to die for. This isn't an exact color match, but it was the closest of what I could find on a budget.
UK Alternative - Sleeveless Knitted Waistcoat Cardigan - £11.99

Cotton Shirt - Blue - $17.49
With the sweater vest, you definitely need to wear something underneath, so why not a blue button down shirt? Granted, Ramza has his long sleeves down, I'd suggest rolling them up as pictured so as not to appear too over dressed.
UK Alternative - Cotton Shirt - Blue - £14.99

Twill Pants Skinny fit - Black - $20.99
You might not be able to see them under Ramza's MASSIVE brown boots, but he is wearing some tight black trousers. I've gone with some black twill skinny fit trousers which I think are pretty useful for any guy's wardrobe. Black trousers go with pretty much everything and you can dress them down or up depending on what you wear up top.
UK Alternative - Twill Pants Skinny fit - Black - £14.99

Delli Aldo Men's Square Toe Dress Loafers - $19.95
I know guys. I've let you down. As much as I wanted to find some gorgeous over the knee men's boots, I was unable to find any within the price range I was going for so instead I've opted for some brown slip on dress shoes. I think these are a really good item to have for your wardrobe as again they go with a lot of different items.
UK Alternative - Mens Milan Slip On Formal Smart Work Shoes - £9.99

Solid Color Cashmere Winter Scarf- $11.41
As an alternative to wearing a cape, I thought this tan winter scarf would be a nice addition to the ensemble. It also provides some of Ramza's tan accents which can be seen on his tunic.
em>UK Alternative - Cashmere Scarf - £7.33

ASOS Leather Cuff Bracelet In Tan - $14.50
As a finishing touch, I've decided to include this leather bracelet. It ties in the rest of the ensemble quite nicely and can be used as an alternative to wearing gloves which would just look out of place in this ensemble. Also tan bracelets are a really lovely item for men to wear. I just think it makes them look badass.
em>UK Alternative - ASOS Leather Cuff Bracelet In Tan - £8.00

And there you have it. Another male casual cosplay for you all to try out! Ramza's outfit, although it's quite simple, requires a lot of small accents to make it actually recognizable. As a preview for next week, I have a lovely gal from Final Fantasy VI that I've been working on. Can you guess who?