Welcome everyone to another edition of Casual Final Fantasy Cosplay where I search the internet in an effort to create ensembles that resemble specific Final Fantasy characters' costumes without all the sewing.

As last week was another female character, this week we're exploring another one of the male characters in the series. I chose Locke, one, because he's a badass, and two, because getting his signature look right seemed like a bit of a challenge especially when considering that this is to be Casual Cosplay. 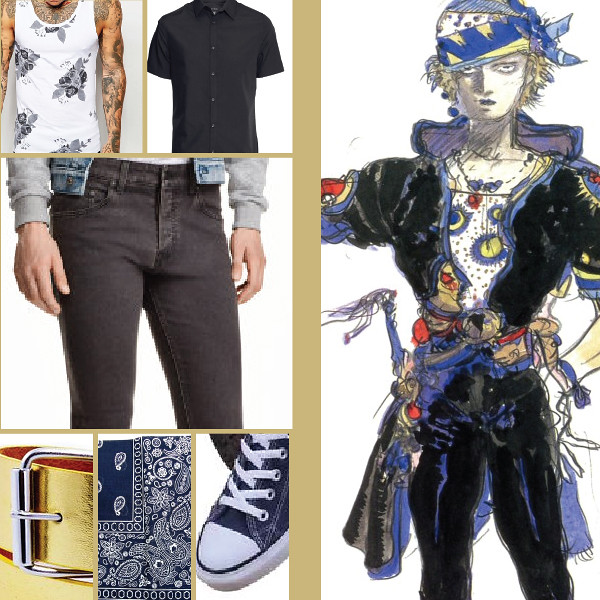 Locke's costume is a bit of a difficult one. He wears a lot of colorful items along with a gorgeous fabric head piece. It's difficult to get things that match the patterns that he has on his headpiece and shirt as they're so unique to his costume. But alas, we're going to give this one a really good go.

ASOS Extreme Muscle Fit - $26.00
Locke wears a cute floral t-shirt underneath a small black bolero like jacket. Unforunately though, there really isn't any shirts out on the market that has the same style of flower that Locke has on his, so we're having to compromise a bit with this floral tank. I like this tank because it's quite understated so anything you put on top of it color wise should match.
UK Alternative - ASOS Extreme Muscle Fit - £14.00

Short-sleeved Shirt Easy iron - $14.95
Although I previously said that I believe Locke's outwear is actually like a black bolero, there aren't really many black boleros on the market for men. So instead I opted for a short sleeved button down shirt. Wearing this, buttoned down with the vest top showing underneath should give the appearance of Locke's bolero/floral shirt combination.
UK Alternative - Shirt in premium cotton - £19.99

Skinny Low Jeans - $19.99
To match his black shirt, you have to have some black skinny jeans. I feel like these are both good in quality and look. I personally love the feel of H&M trousers and think that these would make a really good addition to your wardrobe.
UK Alternative - Skinny Low Jeans - £19.99

CONVERSE NAVY MEN CHUCK TAYLOR ALL STAR LOW CORE - $39.97
Okay, these are a bit of a splurge. I'll be honest, I have a bit of a soft spot for converse. Also I want to note that this is not on a regular retail website, but on Ebay. Ebay offers some pretty affordable stuff and I just want to make you all aware of it. Granted, there is a lot of knock-off stuff on here, but if you don't mind not getting the actual brand, you can really find some good deals on here. So if you're stuck in a pinch, I definitely think you should give Ebay a good look. Just make sure whoever you're buying from has a high amount of feedback ratings with a high feedback score. Now, the reason I went with these over boots is, there are just no really good white boots on the market and my other alternative was to get high tops, but a lot of them are more expensive than Converse! So you get these, which I think will do the job quite nicely.
UK Alternative - Converse Unisex Chuck Taylor Classic Colors Sneaker - £29.89

Novelty Bandanas Paisley Cotton Navy - $2.96
This was a tough one as I wasn't quite sure how to go about it. Bandanas and head scarves aren't really in style at the moment so I thought the safest bet would be to leave it up to you guys. You can wear this bandana as a headscarf much like Locke, or you could tie it around your neck. Think cowboy. Either way I think this should be a nice trade-off for Locke's signature scarf.
UK Alternative - ROYAL BLUE cotton bandana scarf - £1.15

JTC Belt Genuine Faux Plain Leather - $6.49
Of the many items Locke wears around his waist, I thought the gold belt stuck out the most. His belt buckle is gold after all. So I decided to go with a simple gold belt that should compliment the other colors used in this ensemble. Feel free to add more belts in red and blue for a more authentic look.
UK Alternative - Jtc Belt Nice Shades Bonded Leather - £5.99

Overall with Locke, there's a lot of things you can add to him, but for just the basics, this is perfectly acceptable. If you do want to add more, I suggest adding only small accessories and in either blue, red, or gold as you see in the Amano artwork above.

Be sure to check back for next week's edition where we'll be tackling another female character. To give you a hint, she's the daughter of a commander and a famous singer.